by Shreyas Bhat
in News
Comments

In my last post, I discussed the potential of chatbots in enterprise software. My observation with several feature-rich enterprise software is that most users barely use a small percentage of the features in the software. Additionally, it is common for the user to spend very little time in the software per login session. It’s also not uncommon for significant time to elapse between multiple login sessions. An undesired byproduct of this pattern is that the user forgets how to perform basic tasks and needs repeated refresher training sessions. In my past life as a technical specialist on some very complex engineering and data management software, I would find myself training the same user over and over during the same year. The worst that can happen is the user stops using the software and finds creative ways of bypassing the ‘system’, often leading to disastrous consequences.

A key motivation to create FusePLM was to avoid this frustration and costs involved with training for the customer. Let’s take the specific case of a fictitious company, ABC Wearables, where Albert Einstein is the engineering manager responsible for creating Engineering Change Orders (ECOs) and Engineering Change Notifications (ECNs). The task at hand is to release the company’s next generation Display Tracker to manufacturing. The release process at this company requires approval from the Release Co-ordinator, Michael Faraday, prior to release. While creation and approval of ECOs/ECNs can be performed from the workflow module, the chatbot provides an alternate and simpler way of performing these actions. It can be invoked from any page in the application at any time.

Here’s Albert’s interaction with the PLMBot to create an ECN for this release:

Michael can view cards pending his approval, using the PLMBot. Here’s his interaction with PLMBot:

Nikola is yet to complete the SI checklist for this card. Upon completing it, Michael is able to mark this task as complete from the PLMBot as shown below.

This notifies Michael of the task completion and he is now ready to release the ECN. 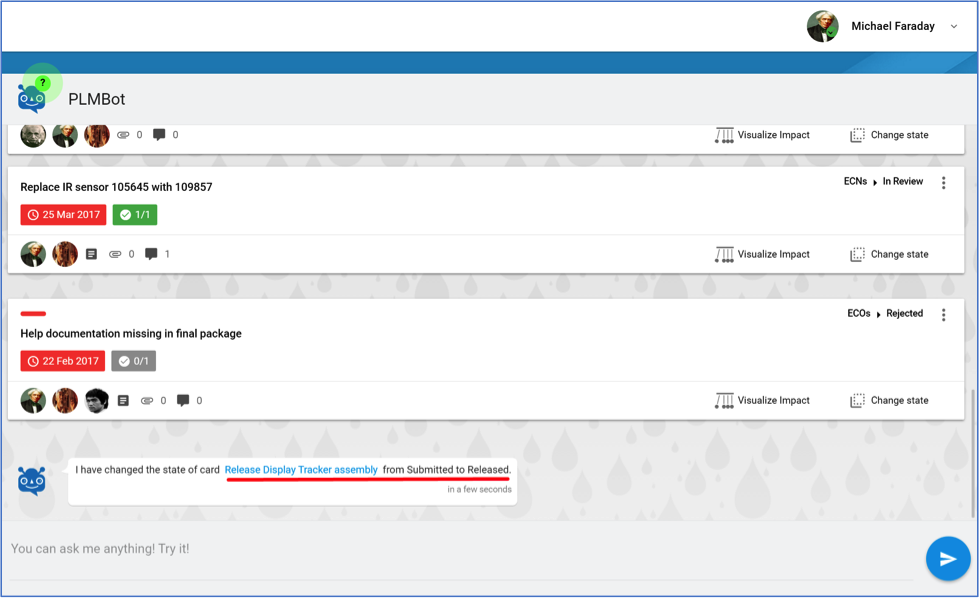 The team at ABC Wearables was able to complete all tasks needed to release the Display Tracker with minimal training, using the PLMBot.

We’ve just scratched the surface with PLMBot and it’s potential is exciting. The vision for PLMBot includes leveraging machine learning, where it would be able to predict the user’s next actions based on past behavior. An example in PLM’s context would be if the BOM rollup cost is higher than a set threshold, PLMBot can automatically open a design issue on behalf of the program manager notifying the project engineer to find ways to bring the cost down.

Video reference: You can check out the PLMBot in action

Sign up to try FusePLM FREE! No credit card needed.